STAY AWAY FROM NEGATIVE PEOPLE 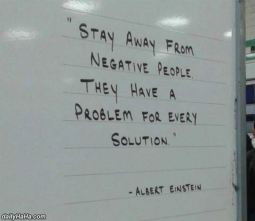 Stay away from negative people