SUPERGIRL HAS A SECRET 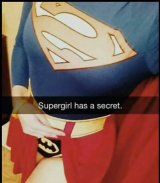 Supergirl has a secret