IN CASE OF WAR BREAK GLASS 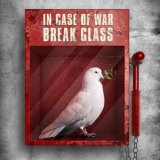 In case of war break glass